A few months back I was browsing Netflix and came across Grabbers and been a fan of Richard Coyle and cheesy science fiction, I thought why not looks funny. 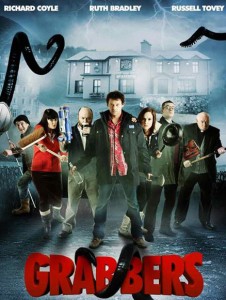 The sleepy coastal community of Erin Island is about to receive some unexpected visitors. Vicious extra-terrestrial predators have landed and they’ve got a thirst on…. for blood. With razor sharp tentacles and an insatiable hunger, the alien creatures are about to indulge in a feeding frenzy the likes of which has never been seen before.

Grabbers starts like many a science fiction film before it with a view of earth from outer space and what looks like a small comet hurtling across the atmosphere. Unlike most films of this ilk this particular UFO (Unidentified Falling Object), doesn’t land near or in some major metropolis or during an important historical event it lands just off the coast of Erin Island a made up island just of Irelands west coast in 2012.

The first batch of deaths happen straight after the intro sequence when an ill fated crew of a fishing trawler encounter what just fell to earth. In classic Sci-fi style we don’t get to see what just took out the three crewmen but we are left pretty much convinced we’ll not be seeing them again anytime soon.

Now we meet our unlikely hero in the form of Ciarán O’Shea (Richard Coyle), a depressed alcoholic member of the islands Garda followed shortly by the movies love interest Lisa Nolan (Ruth Bradley), a visiting Garda from Dublin using two weeks holiday to cover for a local Garda.

The Movie heats up when several pilot whales are found washed up on the beach with large gouges in them. Originally dismissed as a freak occurrence by Dr. Adam Smith (Russel Tovey), events soon prove him wrong when local Super Drunk Paddy Barrett (Lalor Roddy), decides to take a baby Grabber home after catching it in his lobster trap.

From beginning to end this movie is filled with horrific and hilarious scenes sometimes both at the same time, the scene where Paddy’s pet grabber has to be killed creases me up every single time I watch it, you’ll understand when you watch it.

A great drinking film and once you’ve watched it you may never want to be sober again, I love Brian Maher (David Pearse), and Una Maher (Bronagh Gallagher), as the landlord and landlady off the Mahers Pub the only Pub on Erin Island their relationship is scarily believable.

Join the people on Erin Island for many a drink and the Craic!

If you love a Tongue in the cheek Sci-fi/Horror Movie this is the Movie for you and the finale is awesome.