TEETH OF GODS an Interview with Adrienne Jones

Adrienne Jones answers reader questions regarding her upcoming novel TEETH OF GODS, sequel to THE HOAX.

Teeth of Gods by Adrienne Jones

Q:  So what is the premise of Teeth of Gods? What’s it about?

A: In Teeth of Gods, an unearthly assassin has broken through into our world, and Shep is the main target. But along the road to finding Shep, this creature is also taking out the former members of the Forest Bluffs cult. This brings Agent Litner into it, forcing him to find and ultimately work with Shep. Neither is happy about the arrangement, but desperate times call for desperate measures. So we get to see everyone who hates each other from the first book trying to play nice as they take on this threat that affects them all. And of course, chaos ensues.

Q: The Hoax ended on a bit of a cliffhanger – can you give us a teaser as to whether or not the new book picks up right where the first one left off, or are we in for a complete surprise?

A: Teeth of Gods starts a few months after the events that happened at the end of The Hoax. We open with Agent Litner sitting at a café up in the mountains of Vermont. Due to the bizarre murders of a handful of Joey’s former followers, Litner is desperate to seek out Shep, both to warn him and ask for his help. Having discovered the general location of their new lair, Litner is about to make first contact, hoping he doesn’t get instantly killed when they discover him sniffing around.

Q: Will Shep and Patrick salvage their friendship in this book?

A: Well, considering they lied to, betrayed, and almost killed each other, they won’t be sitting around braiding each other’s hair any time soon. I will say that they are forced to contend with each other, and that makes for some interesting scenes. Also, a certain other relationship from Shep’s past is rekindled in a very strange and powerful way in this book.

Q: Did you know while writing The Hoax there would be a sequel? Or was the positive response from your fans the driving force behind a second book?

A: I’d tossed around the idea of a sequel, but it was never a sure thing. The positive response and direct requests for a sequel from readers certainly kept the idea in my mind, but ultimately I had to wait until the time felt right for me personally.

Q: Did feedback from readers influence what you did plot wise in the sequel at all? And what’s the strangest reader comment you’ve ever gotten regarding The Hoax?

A: Feedback from readers didn’t influence my plotting at all, but I think I got lucky in that people tend to like different things about the book, different characters, depending on their personal tastes. There was no single request I got more than others, I mean I didn’t get an influx of emails requesting I bring back one character or kill another—and of course I try to forget the reader completely while writing. Strangest reader comment? I was introduced to a man at my husband’s company holiday party, and he said, “I loved your book. But I didn’t like that blowjob.” It was a hell of a way to meet someone.

Q: Have the other remaining 3 Brothers evolved much since The Hoax? To clarify, I mean in the sense that they were still kind of clunky toddlers in their new human forms, but even then were developing quickly.

A: Yes, you will see a definite change in The Brothers in this book, but in very different ways depending on how their individuality progresses. Juris experiences the hugest leap as far as progression in the human realm, and it gets him into a very sticky situation.

Q: It’s been a while since you wrote The Hoax—did you have to reread and refer back to it as you wrote Teeth of Gods?

A: I did reread The Hoax before starting, but not to check any references or because I forgot anything about the plot. Between writing the book and rewriting and the dozens of edits that come before and during the publication process, I know that book better than my own life story. What I did need was to experience the mood of The Hoax again, the vibe, to hang out with those characters in that world, so I could be in the best place emotionally to start the Teeth of Gods. It was a good experience, reading The Hoax again, it had been a while.

Q: Was it easier or more difficult to write Teeth of Gods knowing the characters so well now, or did they continue to surprise you? Was it easier or harder to continue the story in the sequel rather than starting anew (in reference to plots, characters, matching tone and intensity)?

A: It was both. It was easier because, as you say, I already knew the characters. But in The Hoax, those characters were so full of life, they practically wrote themselves. I wasn’t sure I could recapture that magic, and I didn’t want to force them, or make it too contrived. I’d attempted to start a sequel a couple times in the past, and it just didn’t feel the same, it was like trying to puppet something from a distance. But this time, I really wanted to reconnect with them, to get that feeling back, to visit the familiarity. So I tried again, and when I opened the gates they just came rushing through and took over. I had a vague idea of what I wanted to do, but the plot just took off as soon as I started writing, and then all of a sudden I was back in it, and very pleased that my boys hadn’t left me after all. So yes, it was difficult to finally get the sequel off the ground, but once I did, it was a lot easier than writing The Hoax.

Q: How much of the first book, The Hoax, do readers need to know about to understand the storyline for the sequel, Teeth of Gods?

A: While there is a certain amount of recap in the sequel, I feel like it happened naturally, I didn’t have to force it. But I wouldn’t call Teeth of Gods a ‘stand-alone’. You definitely need to read The Hoax first to fully enjoy the sequel.

Q: Do you think Teeth of Gods will be the last in the series? Could we look forward to seeing any of these characters again? Could this eventually be a trilogy?

A: If you’d asked me that before I wrote Teeth of Gods, I’d have said no way. But now I have to say definitely yes, there will be a third book. I need to finish what I started, and I opened some new cans of worms with Teeth of Gods, though to say more at this point would be too much of a spoiler.

Q: What advice would you give to a writer who wants to be published?

A: Learn your craft, learn to edit, read books constantly. And once you become skilled at editing your own work, utilize a second editor to help you make it even better—everyone needs a fresh set of eyes on the manuscript before it goes to print. It’s nice to have a great idea, but a great idea doesn’t make a book. You can love your idea so much that it’s like your baby, I understand. But you don’t want to present that baby to the world in a shitty diaper with a dirty face and runny nose. You want it clean and polished and smelling powder fresh, or nobody’s gonna wanna pick it up.

Q: When can readers expect to see Teeth of Gods released?

A: While I don’t have an exact date for Teeth of Gods yet, the publisher is shooting for around December of this year, so check back to my site for updates. http://www.adriennejones.net/ 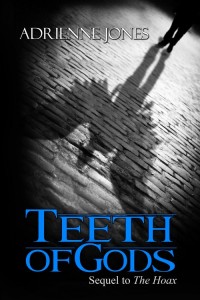 And of course I’ll be announcing it on Facebook and shouting from mountaintops when it comes out. Thanks everyone for the great questions! I hope you all enjoy Teeth of Gods as much as I enjoyed writing it.

One thought on “TEETH OF GODS an Interview with Adrienne Jones”